Want To See If You Are a Facebook Addict? Try Going Without It For 99 Days!

Social media can truly be an addicting pastime. If you have any doubts of that claim, take a look at some of the following statistics:

As you can see, social media in general, and Facebook in specific, are quickly taking over many facets of everyday life.

However, a recent experiment conducted by Facebook has many users up in arms, wondering if perhaps this boon may not be as healthy and helpful as what once was thought. This experiment was performed on mood manipulation, accomplished by manipulating user’s news feeds to elicit specific reactions.

As a result of the outrage over this experiment, which was conducted in complete secrecy without the opportunity to “opt out,” a project has been launched named 99 Days of Freedom. The purpose of this project, as its name would portend, is to find out what life would be like without Facebook for an extended period of time. 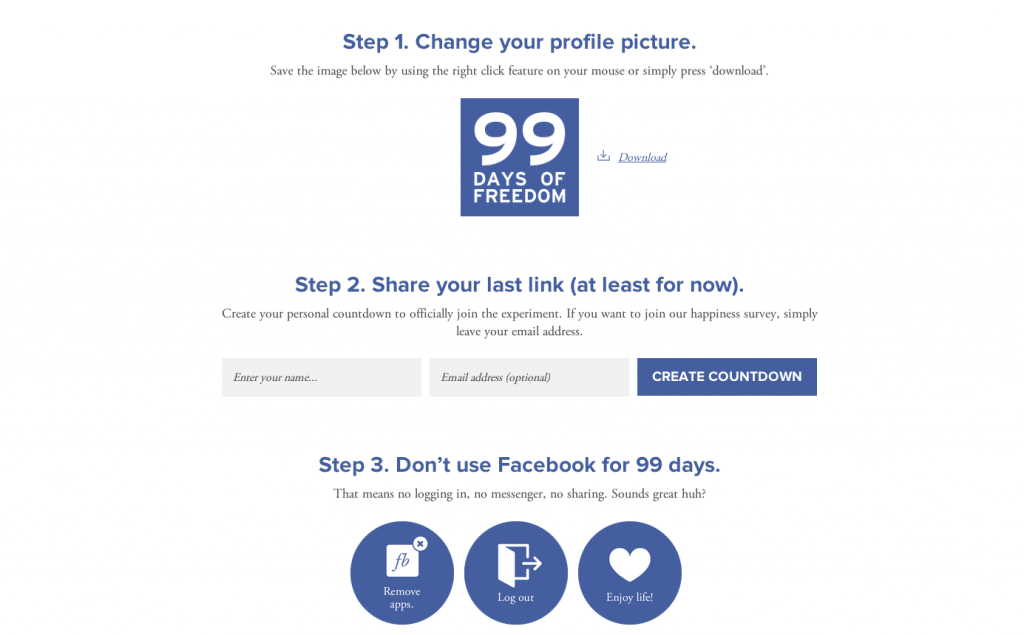 The first step in participation in this project is to download the avatar and set it as the profile picture on your Facebook account. This signifies to everyone that you have decided to take the challenge, as well as providing a reason for not responding to all of your friends.

The next step is to create your personal countdown on the project’s website. You have the choice to simply enter your name, or include your email address if you want to participate in the survey. Once this information has been entered, you will be taken to a page displaying your personal countdown, which you can then share on Facebook.

Facebook is awesome, a claim that you will never get me to refute. However, wouldn’t it be interesting to see just how long you would last on a project like this? Be sure to share any experiences you have in the Comments section below!