Remember our article about the Tweet-A-Coffee a few months ago? An analysis of the campaign, after 6 months, has shown that it was another one of Starbuck’s hits! The major coffee brand has always been very “avant-garde” with its social media presence and campaigns, and they’ve done it again!

The “Tweet-a-Coffee” campaign made it easy and fun for people to send a $5 Starbucks gift card to a friend simply by tweeting it. The only thing you had to do is connecting your Starbucks account to your Twitter account, tweet-a-coffee to a friend and that’s it!

Now how come this Starbucks campaign, once again, was so successful? 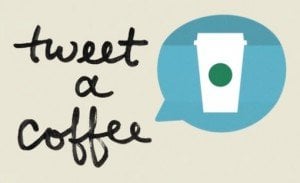 Because Starbucks understands what their customers like and want. People like to make other people having by giving a gift, but mostly, they don’t want to spend a lot of money on it.

So easy sending your Starbucks-loving friend a $5 gift card is a win-win situation: you make a friend happy and it only costs you $5!

The living proof that this simple act of kindness works, were the 27,000 people who actually tweeted-a-coffee, one or multiple times.

The combination of Starbucks really understanding its customers and the creativity and easiness of the “Tweet-a-Coffee” campaign, shows us that Starbucks still got it!