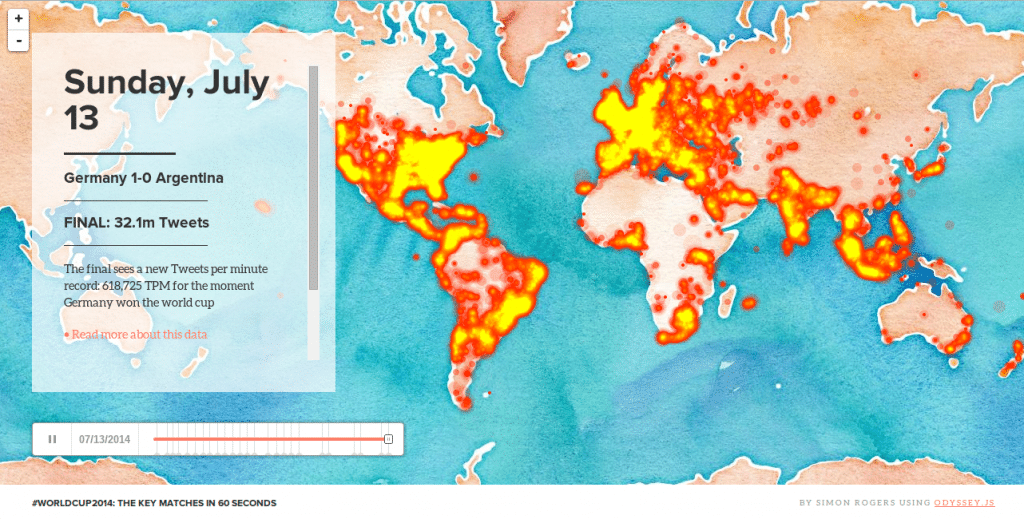 The calm after the World Cup storm: Americans return to their preferred sports, Google’s homepage transitions back to its traditional look, and #WorldCup has finally fallen off the trending radar. Now, social media networks and analysts reflect on the record-breaking event with charts, articles and videos.

Twitter scored 672 million tweets during the tournament. Twitter also divided tweets per minute to conclude the most tweeted-about moments in the tournament with Germany’s win earning 618,725 TPM. However, the most boggling analytic visual is their activity world map during each live game condensed in 60 seconds. With the tagline, “Love every second” Twitter emphasizes its real time social sharing which promotes engagement during television events.

Facebook also shared their findings by reporting 3 billion posts, comments and likes during the tournament. In their infographic, Facebook ranks Brazil as the “loudest” country which is understandable as both the host country, dedication to the sport, and performance in the tournament.Facebook also shared a popularity map, comparing star players’ followings around the world. Business Insider is quick to point out that while Facebook’s overall number is significantly higher, Twitter did not include favorites (which is the equivalent to Facebook’s likes). After BI estimated  the proportion of likes in their total, they found that the difference shrunk from a 2.7 billion lead to 537 million. These comparisons are especially important for advertising decisions.

Although Twitter may be the more logical choice for social media commentary as a live-time and visible, Facebook has more users. However, the people with Twitter accounts that still primarily turned to Facebook to discuss World Cup news showed a sort of social media incompetence. During dramatic moments- for example Germany’s unforgettable five goals against Brazil in the semifinals- people began clogging news feeds and receiving little interaction. Meanwhile, on Twitter, outrageous tweets would flow together- creating a more spirited, virtual community. Nevertheless, reviews of games is appropriate on Facebook so people can express themselves without a 140 character limit.

When the Summer Olympics take place in Brazil in 2016, it will be interesting to see if Brazil is still the “loudest country” on Facebook- or if their futbole culture overwhelmingly dominates a multi-sport following. Can Snapchat users expect another “Rio Live” event, with people in the area contributing to a communal “our story” Snapstory? What are your social media predictions for the next, major worldwide sporting event? Will Twitter seize the lead against Facebook in the next two years? Or, can we fantasize about a new platform to cheer from?