Tired of Selfies? Learn To Photobomb Like a Pro!

It would be difficult to contest the claim that cameras have invaded virtually every part of our modern life. Contrary to popular science fiction stories, however, this phenomenon has occurred outside of the purview of an overbearing, Big Brother-type entity, intent on recording everything and using it in a totalitarian-style regime bent on global domination.

In fact, if you want to look at the primary culprits behind this claim, you need look no further than your own smartphone. If you look at the statistics regarding digital photo taking in general, they can be staggering:

One of the most popular types of photo in today’s modern world is the selfie. With the addition of digital cameras to smartphones, it makes it extremely easy to snap these fun pictures virtually anywhere you may be.

However, there is another relatively-recent phenomenon that, in this writer’s humble opinion, is actually much more fun to take: the photobomb. Contrary to what the name might indicate, photobombs are in no way exploding devices. Rather they are defined as “the act of accidentally or purposely putting oneself into the view of a photograph, often in order to play a practical joke on the photographer or the subjects.” 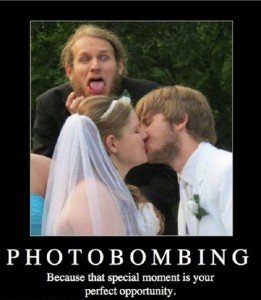 While finding opportunities may be at the mercy of the photo-taking activities of those around you, there are a few tips I would like to share that can enhance the fun of this activity to an incredible degree.

Photobombing is one of the most amusing and harmless pastimes to hit the scene since the introduction of the digital camera. Have some awesome photobombs you would like to share? Post them in the Comments section below!