Taco Bell has blacked out its online presence in order to promote their new mobile app. They have changed their Twitter handle to  @totallynothere and made it appear that there is zero content there. The content on Taco Bell’s Facebook has also been deleted apart from a series of black and white images directing users to the app using the hashtag #onlyintheapp. 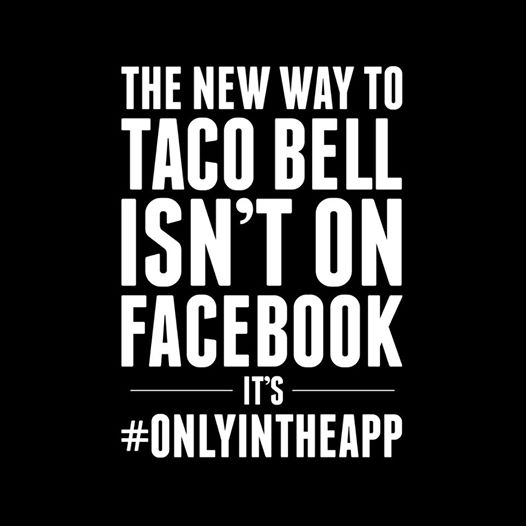 Similar images have been released on their  Instagram . This along with the black out of their website has generated some negative response from social media followers complaining about the app and the inconvenience it’s causing them  because not everyone owns a smart phone. Fortunately this is unlikely to replace Taco Bell’s Facebook, Instagram and Twitter presence for good.

The app will give Taco Bell a competitive edge by allowing its users to order their food ahead. Users will be notified when their food is ready to be picked up, and will be able to pay using the app thus making ordering take out even easier- who ever thought that would be possible?

It is certainly a bold move in social media strategy. What do you think?  Does it bother you that you cannot order on the website? Do you think this campaign is genius or just plain confusing? Let us know below in the comments.