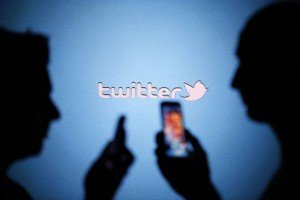 Men are silhouetted against a video screen with a Twitter logo as they pose with Samsung S3 and S4 smartphones in this photo illustration taken in the central Bosnian town of Zenica, August 14, 2013. Twitter Inc will seek to raise $1 billion in the largest Silicon Valley IPO since Facebook Inc’s 2012 coming-out party, according to an IPO filing made public October 3, 2013. REUTERS/Dado Ruvic/Files (BOSNIA AND HERZEGOVINA – Tags: BUSINESS TELECOMS)