In 2012, Adam Kramer and other Facebook data scientists conducted a study on almost 700,000 unknowing Facebook users. For one week, more than half of one million Facebook users were either exposed to positive or negative posts, using emotional words as triggers in algorithms. Some subjects’ news feeds were dominated by positive posts and some subjects’ news feeds were dominated by negative posts. Once released, the study sparked outrage worldwide since Facebook was manipulating emotions unbeknownst to the people in the study. Human experimentation is encouraged to follow a rigid ethical code. Although users give Facebook permission to participate in studies in the “Terms and Conditions,” critics are arguing that Facebook crossed an ethical line. 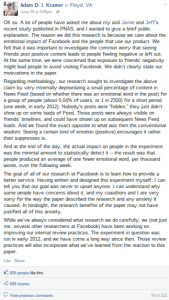 Kramer described, in a public Facebook post, “We felt that it was important to investigate the common worry that seeing friends post positive content leads to people feeling negative or left out. At the same time, we were concerned that exposure to friends’ negativity might lead people to avoid visiting Facebook.” Read- Facebook wanted to see whether or not your emotional state is affecting their ability to make millions of dollars. After all, if you log off Facebook quickly and unhappily, you won’t see nearly as many Facebook ads as the company would like. Kramer then stated, “In hindsight, the research benefits of the paper may not have justified all of this anxiety.” 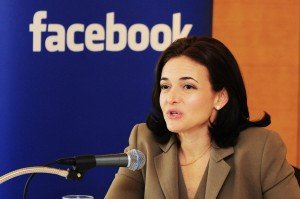 Last week, Facebook’s COO (and Lean In author) Sheryl Sandberg stated, “This was part of ongoing research companies do to test different products, and that was what it was; it was poorly communicated. And for that communication we apologize. We never meant to upset you.” The public is unsatisfied with the apology. Forbes even pointed out the irony of the statement- because upsetting people was essentially the core of the study.

Perhaps the publicity from this report, published in the Proceedings of National Assembly of Scientists, will make people more conscious of the company’s involvement with personal information- and lives. Facebook did not break the law. Nevertheless, something can be legal and not ethical.

What do you think of Kramer and Sandberg’s statements? If you were included in the study, would you feel violated? Should Facebook modify its “Terms and Conditions” regarding psychological studies such as this?