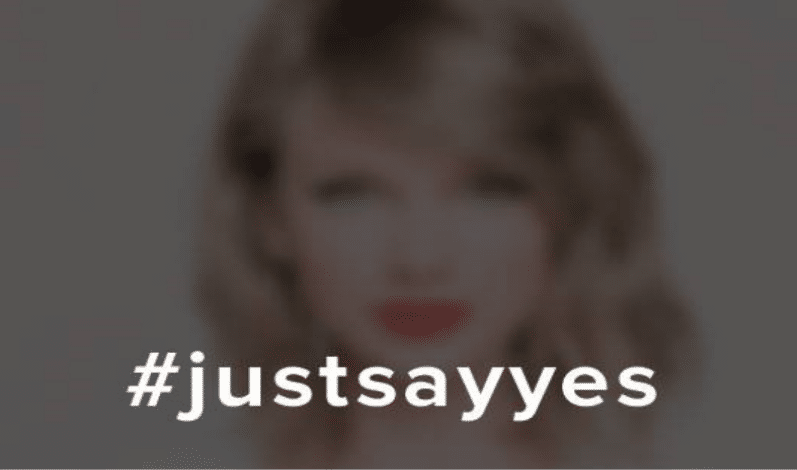 We <3 @taylorswift13 but she asked us to pull her music off Spotify. 40MM of us say “Stay Stay Stay.” http://t.co/lOGMo4qTB7 #justsayyes

Spotify never had the rights to Swift’s newest album titled 1989, and it’s likely that they never will. Instead, customers with free or premium accounts listened to her older music. But one week after the album release, the split was announced. According to Spotify’s blog post, “We love Taylor Swift, and our more than 40 million users love her even more – nearly 16 million of them have played her songs in the last 30 days, and she’s on over 19 million playlists.” Spotify notified listeners on their website, Twitter, Facebook, and Instagram.

Spotify’s hashtag references lyrics from Swift’s hit song Love Story, “It’s a love story baby just say ‘yes’.” Not only was #justsayyes used when Spotify first announced the news, but the brand continues to use the tweet when responding to customer complaints. The hashtag also unites disappointed fans who are hurt by the decision. Spotify then created playlists to help fans cope, and add a little more drama to the situation.

We love @taylorswift13 as much as you do. Here’s a message we hope brings her back http://t.co/yRm5bfNV23 #justsayyes pic.twitter.com/1lj2JB1SMI

Yet Swift’s move shouldn’t have surprised Spotify considering she lamented the music industry’s transition away from purchasing albums in a Wall Street Journal article from July. Nevertheless, it’s hard to predict how long Spotify will reach out to its 1.04 million Twitter followers and utilize its other social media pages. After all, Spotify is drawing attention to their limited music selection.

But if you’re thinking Spotify sounds a little needy- it’s because they are. Swift sold more than 1.287 million albums her first week, which she celebrated on Instagram. Considering Swift doesn’t financially benefit from the streaming service, Spotify may just have to “shake it off.”

Industry experts predicted 1989 would sell 650k first week. You went and bought 1.287 million albums. AND IT'S GOT ME LIKE:

What do you think of Spotify’s social media strategy? How do you think Taylor Swift should respond to the hysteria? Comment and let us know!