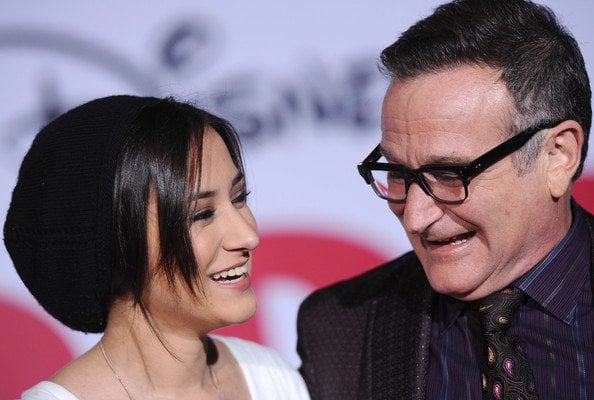 Within minutes of the news of Robin William’s death on Monday, the social media world has been filled with mourning and tears.

However, there are also some hateful messages about Robin William’s apparent suicide. Amid the wave of emotion have appeared several controversial and negative messages that have rattled fans and devastated members of Williams’ family.

Robin William’s daughter, Zelda, announced that she would abandon her social media accounts for a while after being sent harassing messages in the wake of her father’s death.

After Robin William’s death, his daughter Zelda spent lots of time fighting online bullies. She encouraged people to report the anonymous users who were sending her mean comments and horrific pictures about her dad. Later, she wrote to all her fans and supporters on Twitter, “I’m sorry. I should’ve risen above. Deleting this from my devices for a good long time, maybe forever. Time will tell. Goodbye.”

According to CBS, Zelda has been receiving upsetting photoshopped imaged of her late father since this Monday. She and her two brothers released statements paying tribute to their father on Tuesday. The same day, she also said to the hurtful messages senders, “as for those who are sending negativity, know that some small, giggling part of him is sending a flock of pigeons to your house to poop on your car. Right after you’ve had it washed. After all, he loved to laugh too.” 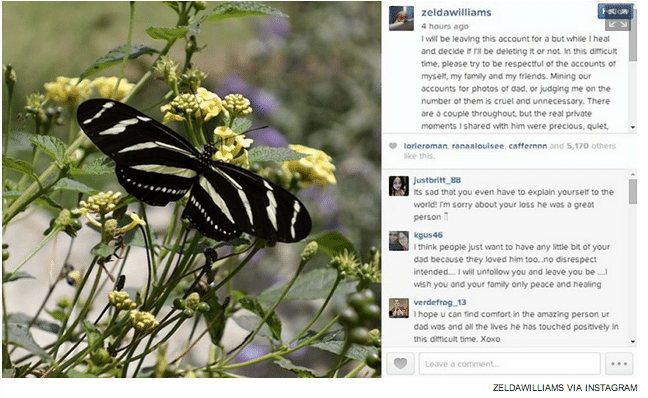 Zelda also posted a lengthy message to Instagram in response to criticism about her lack of photos posted of her dad. She said, “I will be leaving this account for a [bit] while I heal and decide if I’ll be deleting it or not,” she wrote. “In this difficult time, please try to be respectful of the accounts of myself, my family and my friends. Mining our accounts for photos of dad, or judging me on the number of them is cruel and unnecessary.”

She continued, “There are a couple throughout, but the real private moments I shared with him were precious, quiet, and believe it or not, not full of photos or ‘selfies’. I shared him with a world where everyone was taking their photo with him, but I was lucky enough to spend time with him without cameras too. That was more than enough, and I’m grateful for what little time I had. My favorite photos of family are framed in my house, not posted on social media, and they ‘ll remain there. They would’ve wound up on the news or blogs then, and they certainly would now. That’s not what I want for our memories together. Thank you for your respect and understanding in this difficult time. Goodbye. Xo.”

Robin William, the Academy Award winner and comic supernova whose explosions of pop culture riffs and impressions dazzled audiences for decades, had been battling severe depression recently. He died Monday in an apparent suicide. He was 63.