If you have had an eye on the news coming from the tech world over the last few months, you may have noticed that Facebook is starting to make people pretty angry. First, there was the social experiment run back in 2012, which saw them display different types of content in order to try and influence the mood of the reader.

However, what has most people, especially in Europe, in an uproar is Facebook’s release of personal information to the NSA (National Security Agency), as well as their privacy policy in general. Max Schrems, the person behind the lawsuit, claims that their privacy policy violates European law, a contention that could lead to a monetary settlement if upheld. 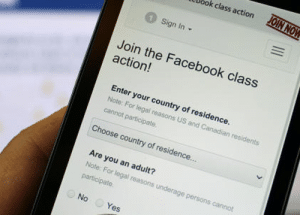 As of the writing of this article, there were over 17,000 people that have already jumped on the lawsuit bandwagon. More than 50 percent of those who have signed on already are from Austria and Germany, with the next highest number of participants, 1,000, coming from Croatia. The UK, as well as both Finland and the Netherlands, also have many citizens who have decided that this was a worthy cause to pursue.

The sought-after damages total up to 500 Euros for each participant, coming in well below the 2000 Euro number that could have been pursued. As Schrems puts it “The €500 figure was chosen to get an amount that would be meaningful for Facebook, while not having a ‘crazy U.S. class action’ where it is all about the money,”

One of the parameters of this lawsuit is that the only participants allowed must live outside the United States or Canada. While this may seem to make this suit irrelevant for American citizens, it actually goes a long way in showing the incompatibilities between American laws and those held by the rest of the world. Facebook’s dissemination of information to government bodies is legal in this country, a position not held by most of our allies.

As indicated above, if you live in the United States, you would be unable to sign up for this suit. However, perhaps it is time someone launched something similar in this county? You decide, and let us know your opinion in the Comments section below!