The Power of Social Media: Humans of New York (HONY)

In August, I wrote about the power of social media and how Australian company Thank you Water had used it to achieve a key organizational goal. Well I’ve found another amazing example of what Social Media can achieve.

Humans of New York (HONY) is a photo blog and Facebook page that gives glimpses into the lives of everyday New Yorkers. On Tuesday October 29, Brandon (the man behind HONY) posted the below photo and caption to his 1.6 million followers. 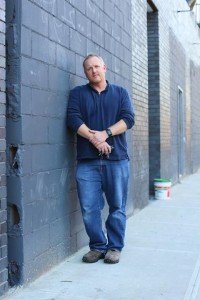 I was riding in a van with a television crew who was doing a piece on HONY. The cameraman, Duane, was behind the wheel. At one point he casually remarked on how bad the traffic was in Ethiopia.
“Ethiopia?” I asked. “What story were you working on there?”
“It wasn’t a story,” he replied. “We were picking up our daughter.”

He then told me the most amazing story. He told me that he and his wife were not able to conceive. “But I’d always resisted the idea of adoption,” he said. “My wife wanted to adopt right away, but I was just never sure if I’d be able to fully love a child that wasn’t my blood.” So time went on, and they remained childless.

Then one evening Duane was watching a television show with his wife. The show was about aid work in Ethiopia. “They were showing before-and-after photos,” he explained. “I remember this one girl. She was skin and bones. But she still had this amazing smile and spirit in her eyes. The aid workers rehabilitated her, and six months later, she looked like a normal little girl. Right then, I turned to my wife, and said: ‘I’m ready to adopt.’”

But it wasn’t as easy as he’d hoped. “At first I thought we needed an infant,” Duane explained. “I just couldn’t imagine missing out on all those early moments of our child’s life.” But for healthy infants, the waiting list was years. “So then we went we moved up to three or four year olds.” But still, the waiting list was one to two years. “The only children you could get immediately were seven and up, and who had physical handicaps of some sort. I just didn’t think I was ready for it.”

But then Duane and his wife went on vacation. And toward the end of the trip, “after a few drinks,” Duane’s wife brought out a brochure from the adoption agency. One of the pictures showed an unsmiling seven year old girl, standing against the pink wall of an orphanage. She had been blinded in one eye. “That’s our daughter,” Duane said.

Three years later after the Watkins adopted her, Chaltu has blossomed. She has grown over one foot, is fluent in English, and although blind in one eye, plays soccer, gymnastics, and basketball. She’s doing great at school, and has tons of friends. “She is the greatest daughter in the world,” Duane said.

“That’s an unbelievable story,” I told Duane. “Can I share it on HONY?”

“That’s fine with me,” he answered. Then he sort of stared at the ground for a second, shuffled his feet, and asked: “Would there be any possibility that you could help us raise the adoption fees to get her a brother? We’ve already found him, but aren’t financially ready yet.”

The link sends followers to an Indiegogo page calling for funds to help Duane, his wife Kristen and their daughter Chaltu raise the capital required to adopt Richard. At the time of writing, the crowd-funding page had already raised $78,182, $52,000 over the goal. 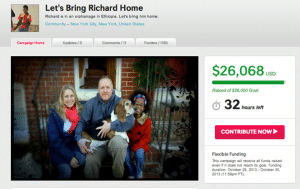 This isn’t the first time HONY has been used as a medium to raise funds for a featured photograph. In July, Brandon/HONY helped raise the needed funds to send Rumi on a Wild West Adventure, succeeding in only 15 minutes. 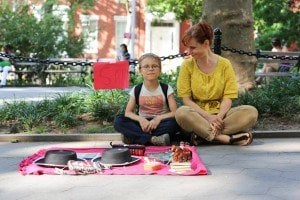 Humans of New York is a perfect example of how Social Media can be used in a myriad of ways including rallying forces for a common good.

All images courtesy of the Humans of New York Facebook Page