#POP is the name of the new iOS app that seeks to add some flavor to what you share with friends and family. POP looks like any other photo and video sharing app, but what sets it apart is that it allows users to interact with their feeds instead of just plainly uploading and sharing video or photo.

One of the major highlights of #POP is that you can use it to automatically post photos as a looping video and share it on Facebook. It also gives you the option to save the pops to your camera roll so that you can later share it on your social networks. What it does is that it allows users to combine photos and videos into a single “pop” by combining it with a video clip or animated GIF.

You can add videos, JPEGs, GIFs directly from your camera to POP. Your remix potential just got activated and upped in a serious way. That means if you have a camera and a stack of photos, you can entertain your friends in a variety of ways without becoming too predictable. 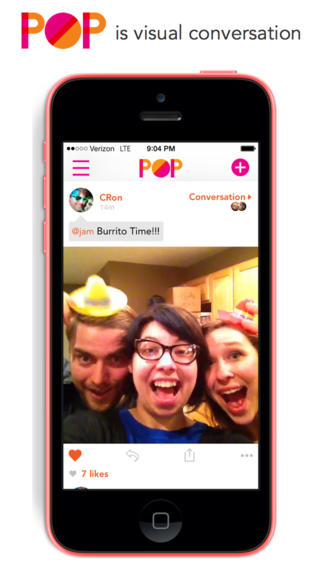 Well, you know it can be frustrating searching for an image only to end up with a 9th grade graphics. Now, this has been taken care of because the developers integrated Google image search which dramatically expands your “Pop Vocabulary”.  There is also a way to search hot hashtags and explore trending topics in the social media.

Many pops are hilarious and are perfect for the punch line and the art of set-up. But pops can also be used to narrate a story. The pop team also notes that pop has received an amazing reception and has become a social network of its own because it allows users to follow other users and engage in discussions about photos and videos being shared.