New York may “swipe left” on tiger selfies appearing on dating apps like Tinder and OKcupid. Manhattan Assemblywoman Linda Rosenthal proposed a bill to prohibit contact between the public and big cats, including tigers, lions, leopards, jaguars and cougars.CNET reports that the effect on dating app pictures was unintentional considering that Rosenthal did not know of the poses’ popularity until after the proposal. Nevertheless, if the bill is signed by Governor Cuomo, violators could face up to a $500 fine. 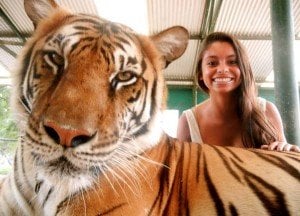 These photo-ops and interactions are common at roadside zoos, traveling circuses, county fairs and other public places. According to the bill, the purpose is “to protect animal caretakers, those interacting with wild animals, bystanders and the animals themselves by preventing direct contact between wild animals and members of the public.” Rosenthal states that it is mostly preemptive to discourage this type of behavior.

A Tumblr page was created in response to the number of people, especially men, posing with tigers and uploading the pictures to dating profiles. The blog’s about page reads, “Documenting the absurdly large number of dudes who have taken a picture with a tiger and are attempting to use said picture to woo women on the internet.”

Apparently man’s best friend won’t do anymore. I have also seen stingrays, monkeys, camels and frankly too many mirror pics at the gym. Perhaps users will have more luck with funny, original bios. Usually the trick is not to come off too creepy. Nevertheless, if this bill becomes a law (shout-out to School  House Rock), singles will have to start looking for a new ferocious pose. 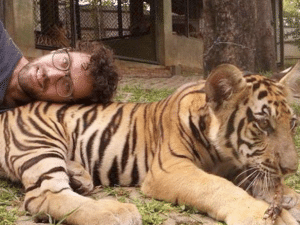 How do you respond to Tinder matches posed with tigers? What’s the most fascinating Tinder picture you’ve encountered?