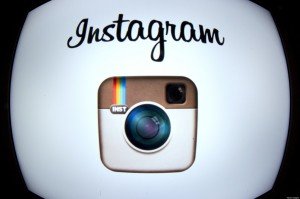 The Instagram logo is displayed on a tablet on December 20, 2012 in Paris. Instagram backed down on December 18, 2012 from a planned policy change that appeared to clear the way for the mobile photo sharing service to sell pictures without compensation, after users cried foul. Changes to the Instagram privacy policy and terms of service set to take effect January 16 had included wording that appeared to allow people’s pictures to be used by advertisers at Instagram or Facebook worldwide, royalty-free. AFP PHOTO / LIONEL BONAVENTURE (Photo credit should read LIONEL BONAVENTURE/AFP/Getty Images)