When platforms such as Facebook and Twitter were first launched, many marketers leap at the opportunity to reach the masses, whereas luxury brands chose to remain niche and elite. However, with social media becoming a key player in marketing, some of these luxury brands are beginning to see the value.

Chanel has been on Twitter since 2011, but it has only recently began to post to its Instagram account. Another major player Burberry is now dedicating 60% of their budget to digital marketing thanks to the success it has seen through social media. 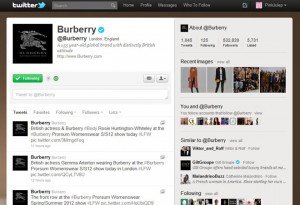 However some other high-end brands are still keeping the idea of social media at an arms length, these include, Apple, Rolex and Monocle.

Monocle’s editor Andrew Tuck said that he was not willing to allow social media to dilute the effect of the printed world and so is reluctant to push forward with the concept of social. He feels that going out to the masses is too much exposure for a brand which is seen as luxury.

Rolex started a Facebook page a year ago but is not a frequent poster, their Twitter and Instagram accounts are private in order to moderate all those who wish to follow. Rolex is achieving exclusivity by selectively monitoring who can and cannot follow them on certain social media platforms. Unlike Monocle, Rolex is receptive to the possibility of going social and listening to what the data in favor of Facebook is telling them.

Is it time for certain brands to embrace the changes in culture and get on social? Should they keep doing what they’re doing to preserve the mystery and stay elite? Share your thoughts in the comments!