Sentiment Analysis is becoming increasingly important as organizations rush to know what their customers are thinking at the exact moment it’s being shared via social media, review forums and/or message boards. How will people respond to the latest trailer? Do people like the new logo? Is the cute, adorable puppy overkill on the new packaging?

There are two main categories sentiment analysis tools fall into

1. Automated – an effort to analyze mass tabulations at rapid pace

An automated sentiment analysis system is one where an algorithm processes the text string and determines it’s overall sentiment; generally flagging comments as either positive, negative or neutral. The issue with automated sentiment analysis is it’s inability to differentiate between subtle nuances, usually only detectable through verbal communication, such as sarcasm. For example; Semantria is a third party API that adds on to Microsoft Excel.  Test the tool here: Semantria Free Trial

An automated sentiment analysis system is one where an algorithm processes the text string and determines it’s overall sentiment; generally flagging comments as either positive, negative or neutral. 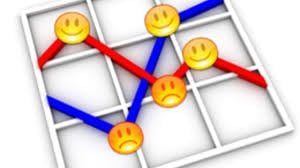 Manual or human sentiment analysis requires the intervention of a human element into the analysis and is required to dissect abbreviations, sarcasm, emoticons, slang etc and determine the true expressed sentiment. The downfall of human sentiment analysis is that it can be extremely time consuming.  For example; Humanele is a service provider, that allows organizations to run granular analysis on large text strings without needing to worry about inefficient in-house methods. 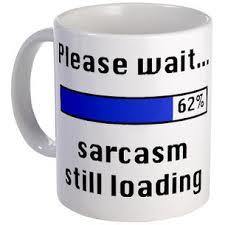 The requirement for granular analysis that takes into consideration the context of the comment, the commenter themselves, the subject matter, and much more is growing.

Target markets are becoming  increasingly segmented and marketers must ensure their message is exactly what customers and consumers want to hear. Fully automated systems have an accuracy rate of only 67% (Paragon Poll).

Each method has it’s own list of pro’s and con’s – however some can be avoided by finding the right sentiment analysis partner; 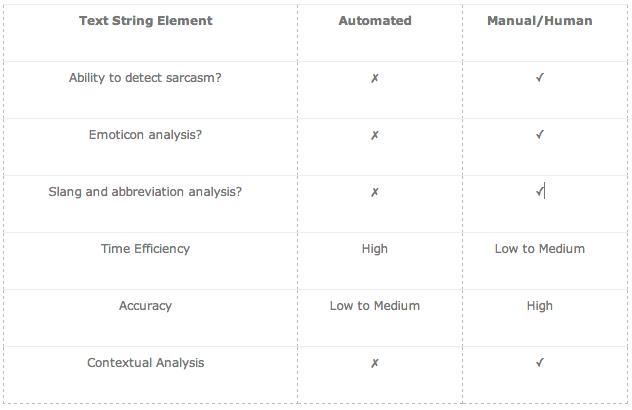 It has become common practice to employ a combination of the two practices to maximize efficiency and accuracy. The use of an automated system, such as Semantria allows the obviously positive/negative text strings to be analyzed first, allowing the manual analysis to focus on the text strings requiring a thorough, granular analysis.