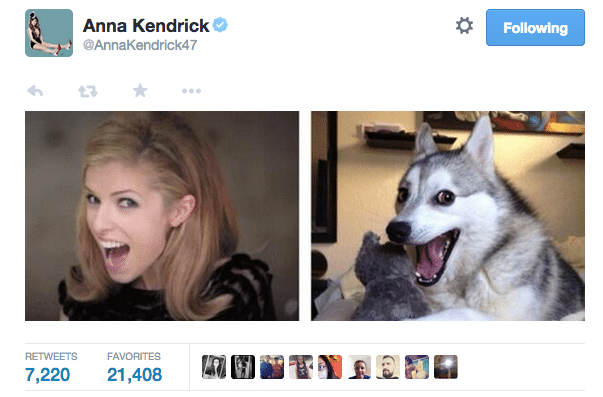 Sometimes your friends just aren’t funny. But luckily there are dedicated individuals that sit around and think of funny things to tweet. Ranging from professional comedians to silly celebrities to very weird, but hilarious Twitter accounts — we hope there’s someone listed here that fits your sense of humor. If we missed one of your favorite Twitter accounts then let us know in the comments section.

@JonnySun varies in material but you’ll enjoy all of it. Keep an eye out for when he messes with huge brands like Delta and Perrier.

ummm so my recemtly used emojis page is the exact plot of the princess diaries pic.twitter.com/7coRsQzP0Q — jomny sun (@jonnysun) August 31, 2014

Not all celebrities need talented writers to say something funny…take a look the hilarious dynamic between @AnnaKendrick47 and @JesseTyler.

INTO THE WOODS is in theaters this Christmas and Cinderella may be dirty but she can throw shade pic.twitter.com/6tARQQm8CF — Anna Kendrick (@AnnaKendrick47) July 30, 2014

When Justin tells me that 3 more people are coming for dinner & 2 of them are allergic to nut oils: @AnnaKendrick47 pic.twitter.com/2B4GBx07XH — Jesse Tyler Ferguson (@jessetyler) August 2, 2014

@jessetyler Ugh that’s so annoying! Loved you as Miranda in Sex and the City!

Let @ElleOhHell entertain you with her random but relatable tweets.

Please remain seated until we’ve reached the gate, then feel free to stand hunched over weirdly sideways for 15 minutes while we do whatever — Elle Oh Hell (@ElleOhHell) December 23, 2014

If you’ll admit that you’ll just laugh at anything stupid, give @shutupmikefinn a chance.

barn owls must have been stoked when the barn was invented — shut up, mike (@shutupmikeginn) December 28, 2014

Look up your favorite comedians, like @birbigs, to see if they have Twitter accounts you can giggle between their tour dates.

@EJGomez shares a lot of conversation-based tweets with companies, biblical figures and friends.

me: fix all the problems with the app Twitter: how bout when u fav something we make the star explode me: oh hell yea Twitter: hell yea

“it says here on your resume that you know spanish?” can i see that? yeah that should say “of spanish.” i know of spanish.

With @Stand_Up_Shots you can revisit some of your favorite comedian’s best jokes.

If Mario were to drive his kart on Kanye’s head he would go really fast right above the ear pic.twitter.com/pagAcUvGsP