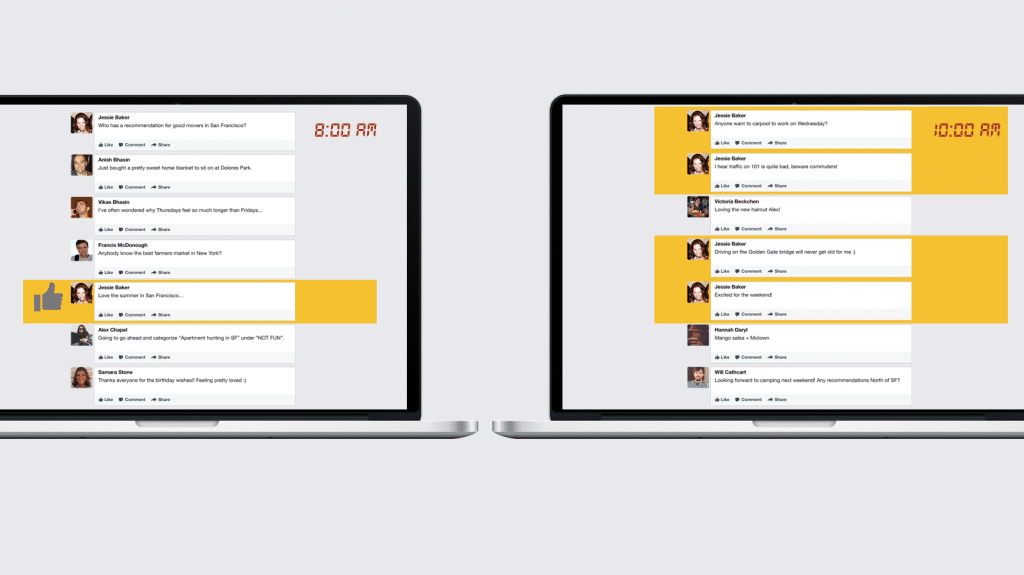 On August 6 Facebook announced their latest update to the News Feed ranking algorithm. The goal of News Feed is to deliver the content users want to see, when they want to see it, ideally in the order they’d like. With an average of 1500 potential stories per News Feed visit, most people don’t have time to see them all. In order to whittle down the list of potential stories Facebook based on our interaction with certain posts i.e. when we like or comment on something that tells Facebook we want more of that, when we hide something it tells them we want less of that. The algorithm previously used 4 factors to decide the order of News Feed posts;

Organic stories that you didn’t scroll down far enough to see will reappear at the top of your news feed, as long as they’re still being interacted with through likes and comments.

For consumers, it means you’ll get to see more relevant stories. Facebook tested the feature in July among 7,000 daily active users. These users saw 5% more stories from friends, 8% more stories from pages and the number of overall stories read jumped from 57% to 70%.

For company pages this means that their most popular posts will be seen by more followers, although it’s important to note that this will not impact paid content. Make sure you include a social call to action on posts you want to get the greatest amount of reach, such as asking fans for their opinions, or for their comments.

Story bumping is currently in effect for 99% of desktop users however the mobile algorithm is getting tweaked.

Last Actor takes the last 50 interactions you’ve done and gives them more weight in the News Feed ranking system, so the people and pages you’ve had the most interaction with will appear higher in your News Feed. When tested among Facebook employees, Backstrom notice a slight increase in engagement.

Backstrom commented on the reason behind the Last Actor update stating;

“A lot of the important symbols that we have in feed ranking are kind of long-term things: what’s my relationship to my friends and that kind of thing. We wanted to make this more real time, “What am I consuming right now?” So we built this new signal where we take into account the most recent interactions that they’ve had.”