Facebook released a long awaited feature that allows users to save posts from their news feeds to review later. The feature was added to the existing drop down arrow, which already allowed people to remove content, unfollow accounts and adjust notifications. Saved content is organized into links, places, music, TV, books or movies. Or, users can review all of their links without categories. While the saved content can be accessed manually, the material will also pop on a user’s news feed to remind them to revisit the marked posts. 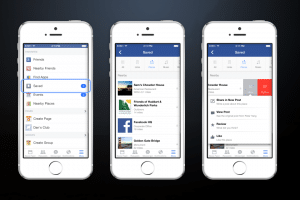 Previously, users would have to “like” material then revisit their activity log to find the page again. Or, they could take a screen shot of the post and find the uploaded material later. Whether a news article found before entering subway or a video that’s not appropriate for the office, people can revisit stories at a time that is convenient for them. According to Facebook, the new feature will be available for the web as well as Android and Apple devices within the next few days.

What sort of content will you find yourself saving the most often? Do you think Twitter will respond with a similar feature?