Facebook tests new version of Offers to increase conversions, give users control when they share with friends 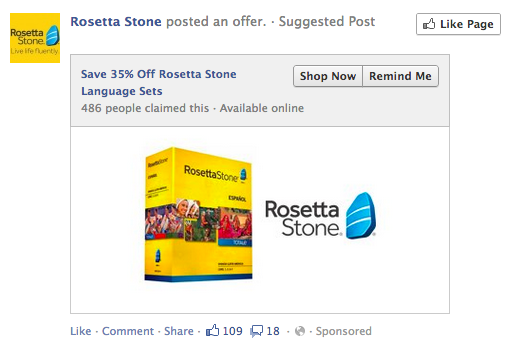 Facebook is testing a new version of its Offers product, which gives users the option to shop immediately or get a reminder before the promotion ends. The interface also lets users decide if and when to share the offer with friends.

The new implementation could be more effective in leading to direct sales for retailers, while helping users remember to take advantage of the offers they’re interested in and giving them more control over how their activity is shared.

A Facebook spokesperson says the company is working with a few global retailers for this test, but for now other pages aren’t affected and their offers will continue to appear in the original format.

For e-commerce offers in the test, users will see two buttons: “Shop Now” and “Remind Me.” Previously, users could only select “Get Offer.” When users click “Shop Now,” they will be taken directly to a retailer’s website. When they click “Remind Me,” users will be sent an email and at a later date will be reminded with a notification on Facebook. It is up to each retailer when they will remind users about their promotion, but they can only send one notification per offer.

Additionally, offers will be saved to a new section of a user’s account. Users will see an Offers bookmark in the left-hand menu. Previously, users were sent an email after claiming an offer, but there wasn’t a way for them to see an offer or retrieve their coupon code on Facebook.com.

After users select “Remind me,” they will have an option to “Tell Friends.” Their activity won’t be shared unless they click this button. Previously, whenever a user clicked “Get Offer,” it generated a story in friends’ feeds and in the recent activity section of their Timeline. Users can visit their activity log if decide later that they didn’t want to share the offer or if they want to adjust their privacy settings on the activity.

Along with these changes is a new design for offers posts, which includes larger images and calls to action that appear as more prominent buttons instead of simple hyperlinks. The new Offers also lend themselves better to general in-store or online sales, instead of being more focused on promotions that require a unique coupon to redeem.

Overall, this implementation seems aimed at maximizing conversions even if has the effect of reducing vitality somewhat. Facebook says 42 million users have claimed an offer, though it’s unclear how many people have redeemed an offer they claimed through the social network. Enabling users to visit a retailer’s site directly from an offer and sending them notifications to remind them to make use of the offer could reduce the number of offer claims that don’t lead to sales.