The years come and go, but some social media platforms are here to stay.  While bug fixes are necessary, we’re even more thankful for the creative minds that work to keep improving social media. Below are our favorite social media updates in 2014 from Snapchat, Instagram, Twitter and Facebook:

Snapchat capitalizes on its visual medium. Unlike Facebook, Twitter and Instagram which just list the location the media is sent from, Snapchat offers geofilters: artistic, location-based filters that mimic the personality of the area. Even better? On Dec. 2, the Snapchat community was invited to create original filters, and after approval from Team Snapchat. We’re looking forward to more extensive options in our future.

The public was invited to private events with Our Story. These curated feeds from some of the world’s most anticipated events provide backstage footage from those lucky enough to attend.

Your Snapchats are no longer limited to your artistic abilities with the finger paintbrush. Now users can move, enlarge, flip and color text. We feel that Snapcash may not exactly be a huge success with users, but because Snapchat is updating features that relate to its main purpose (sending photos) we are even more obsessed with the app. 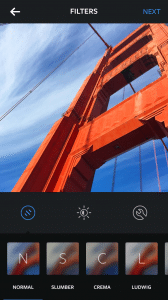 Sometimes it’s the little things. Instagram has gone through a variety of updates to expand its photo-sharing and editing platform. But we’re most thankful for the ability to edit a caption. Whether rethinking the quote you picked or fixing a typo, this will surely come in handy. We just can’t believe it took this long. 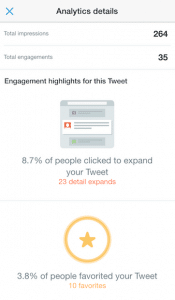 Twitter analytics are just a click away. Below your sent tweet, you can view analytics to see the tweet’s impressions and engagement. This is an easy way for people to monitor their content. And maybe some friends will learn that a little less celebrity gossip and a little more interesting op-ed columns can go a long way.

Twitter reinvented the layouts on iPhone apps. Now, bios are visible under the username (instead of swiping right to read). Additionally, favorites and mentions are easier to access. 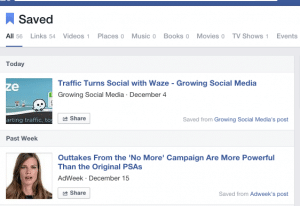 1st Place: Save for Later Feature

Facebook is an important platform for sharing and receiving news.  The save for later feature allows users to mark a friend’s post and put it into a folder in order to be accessed at a later time. It can be used for any posts ranging from TV shows to places to events. Facebook will automatically organize these posts chronologically, however users can also filter by type.

Facebook is crouching into Twitter territory with its trending news column. Using hashtags and key words, Facebook updates people on the most popular conversations on the web while also scrolling through cat videos.

What were your favorite social media updates? Comment and let us know!